One book, a full slate of events, and a community reading together.

The Ocean at the End of the Lane 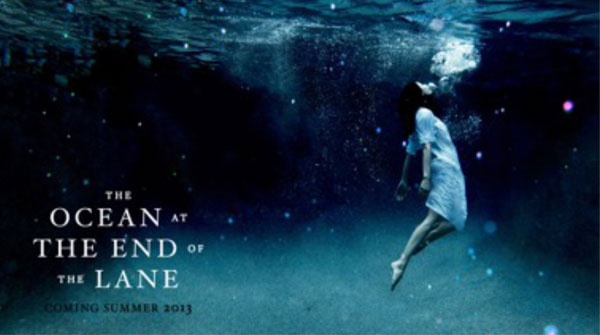 Our book selection this year is “The Ocean at the End of the Lane” by Neil Gaiman.

Mr. Gaiman will appear at the Wagner Noël Performing Arts Center on May 20th, 2015 at 7pm for an evening of discussion on his work, reading from his latest short story collection, “Trigger Warning” and audience Q&A. The event is free and open to the public, however tickets will be required and are available at:

About “The Ocean at the End of the Lane”

Sussex, England. A middle-aged man returns to his childhood home to attend a funeral. Although the house he lived in is long gone, he is drawn to the farm at the end of the road, where, when he was seven, he encountered a most remarkable girl, Lettie Hempstock, and her mother and grandmother. He hasn’t thought of Lettie in decades, and yet as he sits by the pond (a pond that she’d claimed was an ocean) behind the ramshackle old farmhouse, the unremembered past comes flooding back. And it is a past too strange, too frightening, too dangerous to have happened to anyone, let alone a small boy.

Forty years earlier, a man committed suicide in a stolen car at this farm at the end of the road. Like a fuse on a firework, his death lit a touchpaper and resonated in unimaginable ways. The darkness was unleashed, something scary and thoroughly incomprehensible to a little boy. And Lettie “magical, comforting, wise beyond her years” promised to protect him, no matter what.

A groundbreaking work from a master, The Ocean at the End of the Lane is told with a rare understanding of all that makes us human, and shows the power of stories to reveal and shelter us from the darkness inside and out. It is a stirring, terrifying, and elegiac fable as delicate as a butterfly’s wing and as menacing as a knife in the dark.

Gaiman is the #1 New York Times bestselling author of more than twenty books. His works for adults include Neverwhere (broadcast as a BBC radio adaptation starring Benedict Cumberbatch); Anansi Boys; Good Omens (with Terry Pratchett); and the short story collections Smoke and Mirrors and Fragile Things. His most recent novel, The Ocean at the End of the Lane, was described by The Guardian as “a book that summons both the powerlessness and wonder of childhood, and the complicated landscape of memory and forgetting.” It too was a #1 New York Times bestseller, and was voted Book of the Year in the British National Book Awards.

Coraline was adapted as a musical by Stephin Merritt in 2009. Other works for younger readers include The Day I Swapped My Dad for Two Goldfish (illustrated by longtime collaborator Dave McKean); The Wolves in the Walls (made into an opera by the Scottish National Theatre); Odd and the Frost Giants (written for 2009’s World Book Day, illustrated by Brett Helquist); and The Dangerous Alphabet (illustrated by Gris Grimly). His most recent children’s book is Fortunately the Milk, another bestseller.

Gaiman has appeared as himself on The Simpsons and an episode of Arthur, and has written for the hit television series Babylon 5. He has also penned screenplays for the original BBC TV series of Neverwhere; Dave McKean’s first feature film, Mirrormask, for the Jim Henson Company; and co-wrote (with Roger Avary) the script to Robert Zemeckis’s Beowulf. Other of Gaiman’s work has been adapted for film, television, and radio, including Stardust (starring Robert DeNiro and Michelle Pfeiffer); Coraline (an Academy Award nominee and the BAFTA winner for Best Animated Film); Sandman (currently in development as a major motion picture); and American Gods (a forthcoming television series).

A self-described “feral child who was raised in libraries,” Gaiman credits librarians with fostering a life-long love of reading. He is a passionate advocate for books and libraries, and a supporter and former board member of the Comic Book Legal Defense Fund. His blog has more than a million regular readers, and nearly two million people follow him on Twitter. Born in England, Gaiman lives in the United States and teaches at Bard College. He is married to artist/ musician Amanda Palmer, with whom he sometimes performs. More at www.NeilGaiman.com

Neil Gaiman has been honored with numerous awards around the world. Altogether, he has received 4 Hugos, 2 Nebulas, 1 World Fantasy Award, 4 Bram Stoker Awards, 6 Locus Awards, 2 British SF Awards, 1 British Fantasy Award, 3 Geffens, 1 International Horror Guild Award, 2 Mythopoeic Awards, and 15 Eisner Awards. Other honors include the Shirley Jackson Award, Chicago Tribune Young Adult Literary Prize (for his body of work), Comic Book Legal Defense Fund Defender of Liberty award, and an Honorary Doctorate from the University of the Arts, one of the oldest American universities dedicated to the visual and performing arts and design. His novel, American Gods, was the first selection of the One Book, One Twitter book club.

This year, the program will run from April 21st through May 23rd.
April 21st – Book Discussion, Ector County Library, 6pm

May 9th – Dr. Who “Gala-frey,” screening of Dr. Who Episodes, “The Doctor’s Wife,” and “Nightmare in Silver,” costume contest, trivia contest, Selfie with a TARDIS, Ector Theatre, 7pm

One Book Odessa is made possible through the participation and support of: