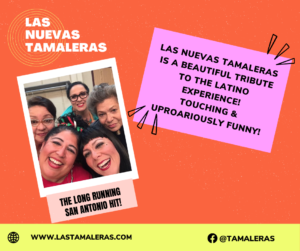 About the Play
The charming Christmas play has entertained audiences in San Antonio for 26 years and is considered as much a tradition as, “The Nutcracker”, “A Christmas Carol, and ” It’s a Wonderful Life”  with many families making it part of their annual holiday ritual with fans anxiously awaiting its return year after year!
The play captures three Latinas in an uproariously comical attempt at making tamales for the first time.  Things become even more entertaining when the spirits of two seasoned tamaleras appear to help the novices make the perfect tamal!
Las Nuevas Tamaleras had its world premiere at El Teatro Bilingue de Houston for its First Annual Latino Playwright’s Festival, Houston Texas, September 1990. It soon had it’s San Antonio premier at the Guadalupe Cultural Arts Center in March 1993. Since then the play has been produced by Theatre Three in Dallas, TX., Teatro Vision in San Jose, CA, La Compania de Teatro in Albuquerque, NM, Centro Su Teatro in Denver, CO. Laredo Little theater in Laredo,TX and back to Teatro Bilingue de Houston. Besides the annual holiday San Antonio production, Burras Finas Productions has toured the play throughout the country. The play is a bilingual one-act comedy, one hour in length and there is no intermission. The play is suitable for children 3 years and older.
Reviews
“Mena’s Las Nuevas Tamaleras is a delightful bilingual comedy that’s funny even if your Spanish is as minimal as mine.” — William Albright, The Houston Post
“Playwright and director Alicia Mena offers us a slice of contemporary Chicano life that allows us to honestly laugh at ourselves. There’s a price to pay, however, as Las Nuevas Tamaleras forces us to ponder the preservation of our cultural patrimony.” — Eduardo Diaz, San Antonio Express News
“Las Nuevas Tamaleras is about passing on a culture to generations that have adopted new lifestyles. The idea may seem didactic, Ms. Mena gets her point across with so much humor and wisdom that the lessons need no salsa to help them go down.”— Lawson Taitte, The Dallas Morning News
October 8th- https://www.ticketfairy.com/event/las-nuevas-tamaleras-with-special-showing-of-the-good-balloon-8oct2021/
October 9th- https://www.ticketfairy.com/event/las-nuevas-tamaleras-9oct2021/ 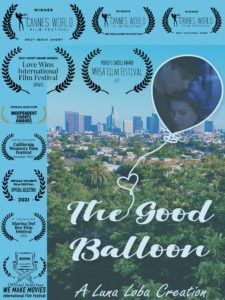 A grieving sister finds a ray of light amidst the darkness with the help of an unusual balloon. This is a true story about grief, mental health and the little miracle stories that offer hope when least expected.