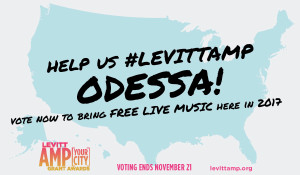 Odessa Arts and Downtown Odessa, Inc. are pleased to announce that Hot Summer Nights has been selected as a finalist for the Levitt AMP Grant, which will award an additional $25,000 to expand Hot Summer Nights from an 8 concert series to a 10 concert series for the 2017 season. Sponsored by the Mortimer & Mimi Levitt Foundation, a national foundation dedicated to strengthening the social fabric of America through free live music, OA and DOI hope to qualify as one of 15 winning organizations competing in the Levitt AMP [Your City] Grant Awards. The Levitt AMP [Your City] Grant Awards are an exciting matching grant opportunity created by the Levitt Foundation to serve small to mid-sized towns and cities with populations up to 400,000. Up to fifteen nonprofits will receive $25,000 each in matching funds to produce their own Levitt AMP Music Series—an outdoor, free concert series featuring a diverse lineup of professional musicians. OA and DOI submitted the proposal for Odessa. The proposed venue site is Noel Plaza. Odessa’s proposal is now posted on the Levitt AMP website for public voting. http://levittamp.org A successful campaign for Odessa depends on community participation to get as many online votes as possible to bring the concert series to town. Community support, as measured by the number of online votes received, will be one of the key factors when the Levitt Foundation selects up to 15 winners. Supporters are asked to visit https://grant.levittamp.org/voter-registration-page/ to register and vote. Online public voting is now open and ends November 21 at 5:00 p.m. Pacific Time. The Top 25 finalists will be selected through online public voting. The Levitt Foundation will then review the proposals of these 25 finalists and will select up to 15 Levitt AMP winners, which will be announced on January 5, 2017. “Hot Summer Nights has always been an integral part of Summer in Odessa,” said OA Executive Director Randy Ham. “To be able to partner with the Levitt Foundation in order to expand the series to 10 concerts, all free to the public, is an opportunity we should all be grateful for.” DOI Executive Director Gloria Hernandez concurs, “Watching Hot Summer Nights grow from a simple outdoor concert to a full fledged block party complete with food trucks and activities has been thrilling. We’ve been wanting to expand the offerings to 10 shows, and this grant will go a long way to achieve that.” OA and DOI asks supporters to start spreading the word to family, friends, colleagues and neighbors and rally the community to sign up and vote for Odessa’s proposal. Learn more at http://levittamp.org. On the web: odessaarts.org Facebook: facebook.com/odessaarts Twitter: @odessaarts For more information call 432-337-1492 Odessa Arts exists to support and promote the Arts in Odessa and Ector County through Cultural Tourism, Arts Education and Arts Advocacy